It’s not every weekend I travel to watch rugby in another country but my interest in the sport took me from Scotland to Italy and not only was I happy with a win I experienced the most luxurious train journey home by train.

Come with me and experience Executive Class on Trenitalia’s service from Rome to Milan, step on board the Bernina Express and look in awe at the majesty of the Alps from arguably the most scenic rail journey in the –  then onto Europe’s first High Speed train the TGV and end the journey on the Eurostar from Paris to London.

The day started in Rome at the NH Hotel Vittorio Veneto where I had stayed for two nights – the hotel lives up to its 4 Star rating my only complaint was the smallish size of the room.

I arrived at Roma Termini railway station and although very large, with more than thirty platforms it was easy to navigate my way to the Trenitalia Executive Lounge, situated next to platform 1. The lounge was very well decorated, with large comfortable seating areas, room for baggage and a very well stock bar with snacks and non-alcoholic drinks. Comparing this railway lounge to those I have visited in the U.K. Rome’s was superior in both ambience and facilities.

My train arrived and as I had Fastrack boarding I was sitting in my seat within 5 minutes of leaving the lounge. That’s what I call service!

I was taken aback by the space in the Executive Class carriage, there were only twelve large seats in the carriage compared to  xxxxx in the First-Class equivalent. The Executive Class Stewardess, Raffaella provided 5-star service well equal to any business class airline service.

The extra space was a delight and the seat larger than any I’ve sat in on any mode of transport. 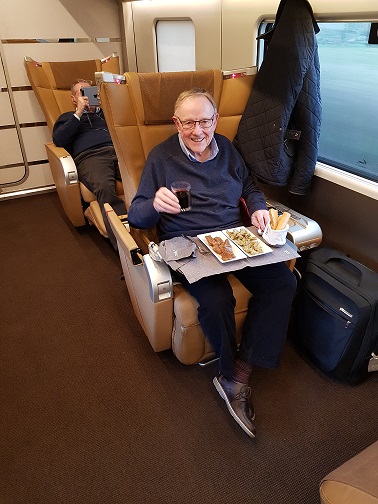 This is travel at its finest.

I was delighted to see there was a meeting room on board, available for exclusive hire for around €30 per hour. A wonderful facility for business travellers or those wishing to do work in a quiet space. The room was large, with a boardroom style table and all the facilities you would expect in a traditional meeting room. A fantastic facility giving business travellers the opportunity to continue working on the go.

This was easily the best train journey I have ever had the pleasure of taking – Trenitalia have raised the standard and are now the rail company for others to follow.

Following an overnight stay in the nearby Milan Hilton which was most comfortable, I checked out and walked to Milan Centrale. When Google Maps told me, I had reached my destination I thought no this is not the railway station it must be the City Hall or an important Government building. However, Google is always correct and the impressive building before me was indeed Milan Centrale! The Architect is the same as designed Union Station in Washington D.C.

I was travelling on a regional Trenitalia train to Tirano to join the Bernina Express to Chur in Zurich. In Centrale I found the Departures Board and scanned for the platform Number for my train. To my horror instead of a platform number in the space was the word “annullato”, now I do not know many Italian words and annullato is not one of them, but I came quickly to the conclusion the message was that my train was cancelled. It was thirty minutes before departure time and I made my way quickly to the Enquiry Office where I was dismayed to see a queue of about ten passengers and beyond the queue a room full of people all waiting to see a reservation consultant. The ten in the queue were waiting to obtain a numbered ticket and then wait until their number was called. I immediately came to a judgment that there was no point in waiting and I headed toward the platform area and a different Departure Board – to my relief, my train was on the Board with a Platform Number!

After what felt like a quick 2.5 hours I arrived in Tirano – when transferring at Tirano onto the Bernina Express you must change Railway Stations the reason being is that the Bernina is a single metre gauge. I had about 1.5 hrs to spare in Tirano and had a walk through the town, it was very quiet and later the restaurant waiter Andreas told me that in the winter it was always quiet but in the summer months it was very busy.

Quick tip – to get the best scenic views from Milan I recommend sitting on the left side of the train and on the right from Chur on the Bernina Express.

The Bernina Express has been on my wishlist for a long time and it didn’t disappoint. As the train climbed higher and higher through the beautiful countryside, the Cars are all the Panorama type, and this gives an interrupted view of the ever-changing view of and majesty of the Alps. It’s hard to put into words just how spectacular the vistas were.

The Bernina Express is an experience of a lifetime, not just your ordinary train journey.

In the four hours on board, the staff were attentive and knowledgeable about not only the train but also the various mountains we were passing through, this greatly added to the outstanding experience. Advance booking is necessary for the summer months as the train is extremely busy.

The journey from Tirano takes about four hours and too soon we arrived at our destination for the night the Swiss town of Chur. 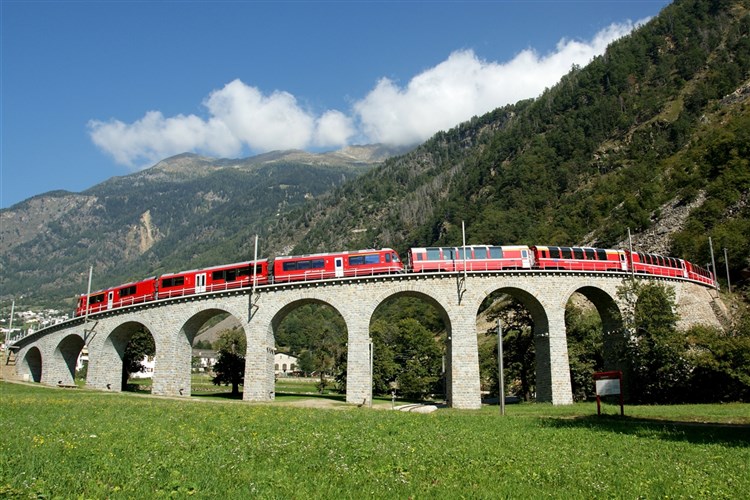 The train station at Chur, although not large is superior to most that are found in equivalent size towns in the U.K. I quickly found my platform and boarded the train.

The train was a double decker – there are a couple of advantages travelling on the upper deck firstly, you get a better view of the countryside and secondly, the ride is smoother. The journey time is 1.5 hrs and soon we were travelling through the suburbs of Zurich.

When I think of Switzerland my first thought is a nation that is precise in all that it does – my train from Chur was due to arrive into Zurich Hauptbahnhof at 10.48 hrs and as I checked my watch the second hand reached sixty seconds exactly as the train came to a halt.

Coincidence? I think not!

If my only experience of Switzerland was Zurich Hauptbahnhof I would be impressed. The concessions are of high quality. The restaurants are numerous covering every budget and taste, the one I stepped into had a mouth-watering buffet selection and it was only 10.30am.

I opted for a WURST takeaway and wasn’t disappointed – everything is quality and well ordered.

Along with the Bernina Express, the TGV has been on my list for some time, and again, it didn’t disappoint. The carriage was comfortable and spacious, although not a patch on the Executive Class carriage of the Trenitalia from Rome, I would compare it to Virgin West Coast. Refreshments and food is by Trolley service.

The TGV has a legacy of speed and innovation, ahead of its time when first introduced in the seventies it is the workhorse of several European railway companies, so I was expecting super high-speed travel to Paris with maybe a hint of nostalgia. The trains have been modernised and everything felt new although not futuristic or over stylised. The passengers were mostly business travellers. The train was remarkably quiet and even at very high speed, around 175mph, there was no swaying as often experienced on the Pendolino in the UK.

After just three stops I reached Paris Gare de Lyon in only 4.25hrs. Not bad timing from Switzerland. 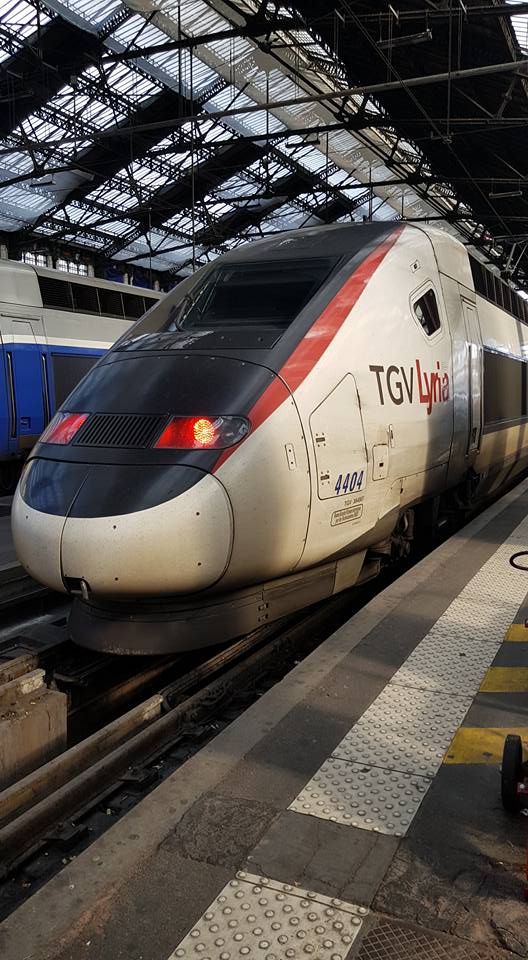 I stayed at the Crowne Plaza on The Place de la Republique which was perfectly located for a spot of sightseeing before I boarded the Eurostar to London. I’ve never travelled on the Paris Metro before, so I took the advice of a friendly Parisian to find the correct line and bought my ticket at the automated machine. After three stops I was at the main Gare du Nord station and I soon found the Eurostar check-in desk.

Check-in and security were efficient and hassle-free and I found my way to the Business Premier Lounge on the second floor above the security area to enjoy some relaxation before boarding. There are other lounges also available for Standard and Standard Premier Class ticket holders.

The Lounge is divided into various ‘themed’ areas, my favourite being the manor house. It reminded me of being in a stately home in the English countryside. With twelve to choose from, I’m sure there’s an area for every taste.

I was blown away by the selection of food and refreshments on offer. The variety of food was astounding as was the fully staffed cocktail bar with its own exclusive cocktails. This far excels most airline lounges I’ve been in and it was great to see some healthy options on offer, although plenty of treats to indulge in, too! Be sure to be in the Lounge 1.5hrs before departure to give you time to relax and enjoy this quality aspect of Eurostar Business Premier service.

Top tip – leave at least 15 minutes to get to your seat as it’s a long walk to the front of the train where the Business Premier carriage is located.

The hostess checked my ticket and kindly advised me my seat was second on the left after I entered the carriage, great service and these little touches make Eurostar really stand out over other rail operators.

The carriage was light, spacious and very comfortable. The seat was large, although not as luxurious as the throne on Trenitalia! It was a perfect end to my journey from Rome and Business Premier certainly had a few nice touches especially the Lounge and hot meal served at your seat.

The TGV of Eurostar soon reached its cruising speed of 180 mph and soon we were in the outside darkness of the English Channel Tunnel. The passage time in the tunnel was twenty minutes and after a stop at Ebbsfleet to disembark passengers we were another 20 minutes to reach St Pancras five minutes ahead of schedule.

The journey only lasted 2.5 hrs.

In summary, rail travel has many advantages over other forms of travel. Firstly you depart and arrive at the centre of the destination city. Check in formalities are minimal compared to airports. Comparing class of travel with the same class of travel you always will have a more comfortable seat than you will in air travel. You will see the scenery from the window of the train After experiencing the wonderful views on the Bernina Express and the space and luxury on the Trenitalia.

I’m so glad I didn’t fly home, or I would have missed out on such a fantastic experience.